Mkuranga District depends on Agriculture as the main stay of its economy.  There are 2432 sq kms in the district.  Out of this, 1934 sq km which is about 81.6% of the District area are arable land which is suitable for cultivation. Crop cultivation is the main land use in Mkuranga District and parts of the land are used in livestock husbandry, forestry and marine production. Most of food crops grown in Mkuranga district are maize, cassava, rise, huskers, and sweet potatoes and leguminous, while the cash crops cultivated include cashew nuts, coconuts and tropical fruits like oranges, pineapples, mangoes passions, and water mellow

About 80% of the population depends on Agriculture as their sole Pre-occupation. It is estimated that about 48,000 households are engaged in Agricultural activities. The main Agriculture crops mainly cultivated are

Cassava is the most important major reserve food crop grown in the district. Cultivation of this crop is emphasized by the government authorities because it can withstand the currently adverse weather conditions, during periods of poor rainfall cassava become the only important food of the indigenous.

Paddy is the second most important cereal crop after cassava cultivated by indigenous. It is grown in swampy areas and on irrigated areas; drawing water; from rivers especially Yavayava village.  Paddy growers use local variety of seeds.  The district has 17150 hectors about 0.7% of district area  is suitable for paddy cultivation but only 254 hectors is cultivated about 99% of the potential area to grow paddy through irrigation remain unused. 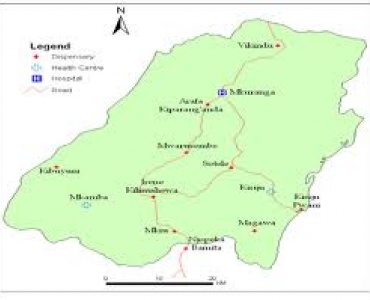